Born in 1990 in Giessen and raised in Marburg an der Lahn, the real estate businessman has been an independent entrepreneur since 2011 after gaining experience abroad in Australia and Dubai. Initially, he was involved as a co-founder with the development of a restaurant chain, which specialized as a company of the system gastronomy on the offer of healthy, quickly prepared dishes in prime locations of medium-sized cities. 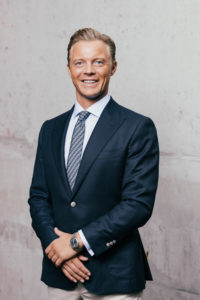 After selling his shares to his co-founder, Damian Fenner moved to Berlin in 2013 to gain a foothold in the prospering Berlin real estate market. Damian Fenner joined the small one-man real estate company of his uncle, Uwe Fenner, and rapidly built it up into a now well-known Berlin project developer. After one year, Damian Fenner was to succeed him as managing director and also as the main shareholder. In this real estate company, the Fenner Group GmbH & Co. KG with three affiliated subsidiaries, he was given power of attorney after only half a year and became the sole shareholder after one and a half years.

Along the way, he took the exams to become a real estate agent and an instructor for the profession of real estate agent at the Berlin Chamber of Industry and Commerce. In August 2021, Damian Fenner will start a distance learning program in political science at the Distance Learning University of Hagen. Damian Fenner now leads as sole managing partner the Fenner Group GmbH & Co. KG with its 5 affiliated companies and currently over 20 project companies, as well as two proptech investments. Uwe Fenner continues to advise the group of companies as chairman of the advisory board. In the last year (2020), the investment volume for purchased apartments, houses and land is expected to reach or even exceed Euro 30 million. In 2021, the transaction volume will exceed Euro 50 million.

Damian Fenner has been a member of the CDU since 2016. Formerly a highly motivated soccer player, he has now swapped soccer for the golf ball.